Prophesy Against the Nations: A Final Commission

It is nearing a year since the last post was posted on this website. It is now time to announce the final commission of God’s Church that will lead directly into God’s Messiah—Jesus Christ—establishing the reign of God’s government on earth.

The final fulfillment of end-time prophetic events has been held back by seven years, and some of those events will be fulfilled in a somewhat different manner than previously revealed if Christ had returned in 2012. These matters are revealed in the new book, Prophesy Against the Nations.

That book in soft cover form was given out to those in God’s Church at the 2016 Feast of Tabernacles and it was also freely available to any who wanted to read it on this site, as segments of it first began to be posted back in November of 2015.

For some time now, God has made it clear that major end-time events were indeed being held back and would not begin to be fulfilled until this book was made available on a dedicated site and available in several languages. 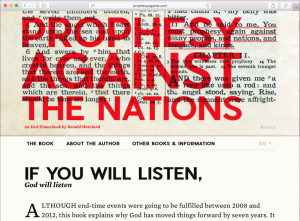 That site (prophesyagainst.com) was launched before this year’s Feast of Tabernacles and different language editions are now rapidly being added. Due to whom it is that God is addressing more directly than ever at this end-time, two major languages are being added for the publication of this third end-time book; they are German and Russian. These two nations will each play a crucial role as to the degree of severity end-time events will become fulfilled.

Now that this new book site has been launched, we will be removing those chapters from this blog. The reason for doing this is that we have now made this book available in its fully formatted form on its own dedicated site. This book will be made available only to download and read in a PDF format, on eBooks or Kindle. It is not going to be made available as a printed soft or hard cover book. The purpose for not printing it is that all resources are going to be used to disseminate it by means of the Internet only. Printing and mailing costs only reduce our ability to more broadly distribute it.

There is a narrow window of time for the thrust of the Church’s final commission to be fulfilled in the dissemination of this book. Most of that will be between now and the time when the devastation from the first four Trumpets is unleashed upon the modern-day nations of Ephraim and Manasseh—the United States, and the United Kingdom, along with her closely related Commonwealth of Nations.

Those events are still being held back (Revelation 7:1-4) from beginning until God has completely sealed a few remaining people who will directly serve Jesus Christ in his government once he returns.

Once those catastrophic events are unleashed on these great nations of the earth, the ability for the world to hear this final commission and message will be cut back dramatically. There is not much time between the catastrophic events of the first four Trumpets until the pouring out of the plagues of the Seventh Trumpet. After that begins, this final commission for the Church will not have much of any work remaining.

It should be noted that the title of this book, Prophesy Against the Nations, speaks of nations, but prophecy about nations is very often spoken of in terms of “mountains and hills.” These terms also fully apply to various government bodies, and is also about various governing bodies of God’s Church that were scattered after the prophetic Apostasy (great falling away) that occurred in God’s Church in 1994. This Apostasy also began a very specific countdown to Christ’s actual coming and return to this earth, all of which is fully explained in this new book.

This final commission is about a powerful final message God is sending out to nations of this earth and to His Church that was scattered. It is about the importance of beginning to recognize the need for God’s intervention in the deliverance of all governments of the earth into a new government that is about to be established over all by Jesus Christ himself.